Below are two comments that I wrote. One is to the CEO of Bank of America about their decision to gouge even more profits at the expense of their customers, and the second is a response to a very clever picture from "How to Raise Your Vibration," which has contorted a dollar bill(s) to read, "We need a revolution." They fit nicely together, I think.

You have made the outrageous decision to squeeze even more money from a citizenry and clientele that is beleaguered by an economic downturn and innumerable accomplished and impending foreclosures, a downturn that was caused specifically by the fraud, deception, and malfeasance of banks, accounting firms, ratings companies, brokerage firms, and many corrupt corporations, yours included.

Charging your customers a $5 monthly fee to access money in their own account (money that you already make money on by holding it and loaning it) is beneath contempt.

I was a loyal B of A customer for many years, but I will have nothing more to do with your firm until your egregious gouging of customers ceases.

This latest outrage is the last straw. I am urging everyone on my social network and everyone on my blogs to find a local savings and loan for their banking needs and turn their back on vultures who prey on the vulnerable while stuffing themselves with ever more unconscionable profits and bonuses while stiffing customers and society at large. Furthermore, I am encouraging my contacts to encourage the same from all their contacts!

Without a radical change of course for your bank, we will prove that you are not too big to fail!
(I ended with my usual, but newly amended aphorism to be found at the end of this post).
The following was posted on Facebook.
https://www.facebook.com/pages/How-to-Raise-Your-Vibration/204840666199710

As the great Gil Scott-Heron said, "The revolution will not be televised." Why? Because we have allowed the corrupt few to steal our media and our political system for a "free marketing, deregulating" lie.

It is time to take our institutions back.

Government is not our enemy. But a government controlled by corrupt corporations and the politicians who do their bidding is by far our biggest danger. No group of terrorists world wide could wreak such havoc on our society or the world as the destruction we have allowed these corporate vultures to rain down on us with absolute impunity.  And everyday, their political lackeys and media mouthpieces propose ever greater outrages.

The revolution may not be televised, but it can be organized and energized, and it is time that we do our part to help bring down this false prophet, PROFIT! Prosperity? Absolutely! But profiteering, like the pirates of old, must be stopped cold. We must rid our society of banksters and profiteers. Fair wages; equal protection under the law; health, safety, and a clean environment: these are the things that a fair and functional society can provide. However, these are the very things that are anathema to a system based on the perpetual degradation and exploitation of the many for the protection and profits of the few. This oligarchy needs to fall and be replaced by a new vision and model of governance practicing real American values of rewarding hard work, seeking to ensure fair treatment, and balancing the rights of the individual and the society to the mutual benefit of both.

Truth...Justice...these really have been taken away from us, or rather, we willingly gave them up for the dangling carrot of personal profit over honesty, integrity, and conscience. We have created several generations who believe only in the first half of the Golden Rule, "Do Unto Others!", and we have been sold the idea that "As you would have them do unto you," is bad for business. Well, if that is true, then it's a bad business that we are in!

We don't need a Superman, we just need to be real Americans again. Our kryptonite has been selfishness, greed, and a disregard for our fellow man (Yes, on this Columbus Day, I know that our history is rife with the antithesis of my "real American society," filled with the repeated intrusion of this Kryptonite, but history has also shown a slow, but steady progress and evolution toward the ideals of Truth and Justice, and despite this latest, thirty-year set back, we can help to restore that progress by joining the fight.

Whether you are of the 99% or the 1%, I encourage you to join the fight to restore integrity to our system.

Thanks for Sharing (An Homage to Three Who Passed Today)

Steve Jobs was a unique individual who made world changing contributions to the modern scene. He will be sorely missed. 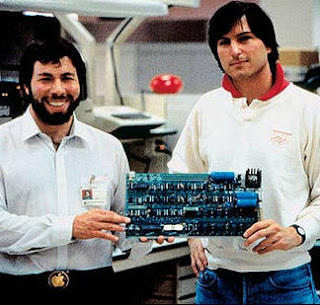 Steve Wozniak and Steve Jobs with their vision of the future...

Ironically, two other people died today who also made world changing contributions to the modern scene, yet most people will never have heard of them.

As quoted from USA Today—The Rev. Fred Shuttlesworth, the civil rights icon hailed in his native Alabama as a "black Moses," died Wednesday. He was 89. Described in a 1961 CBS documentary as "the man most feared by Southern racists," Shuttlesworth survived bombings, beatings, repeated jailings and other attacks — physical and financial — in his unyielding determination to heal the country's most enduring, divisive and volatile chasm.

Rev. Shuttlesworth was said to have pushed MLK to come to Birmingham where the freedom movement finally caught the eyes of the world. His story is remarkable, and his kind of courage is seldom seen. 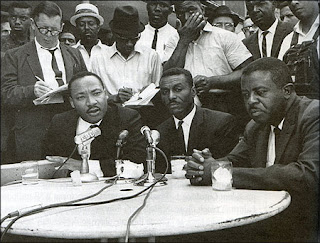 The Reverends Martin Luther King, Fred Shuttlesworth, and Ralph Abernathy
at a press conference in Birmingham.

Finally, on a more personal note, the third unique individual, who shaped the world in a very different way, was the great Scottish guitarist, Bert Jansch, who died today at 67. He is the first guitarist that I heard doing absolutely remarkable things on the guitar. He did not play like anyone else (Yes, he was certainly influenced by Davy Graham, but, to repeat one of my original slogans: he did not imitate; he did innovate). He wasn't the fastest or the most polished. He did not play classical or flamenco like John Williams or Andres Segovia. He did not play flashy gypsy jazz like Django Rinehart, or cool country like Chet Atkins, or flying flat-pick like Doc Watson, yet his complex and eclectic style (which often sounded like two, and sometimes three, guitars playing at the same time) influenced the world of folk, and rock, and country, and jazz like very few people. His innovative approach to the acoustic guitar, along with his musical cohort, John Renbourn, inspired Paul Simon, Donovan, Jimmie Page, Neil Young, Bruce Cockburn, Will Ackerman and Alex DeGrassi (whose acoustic guitar albums helped usher in New Age as a genre), and thousands of other guitar players. Pentangle (the seminal folk-baroque-jazz-rock group with Jansch, Renbourn, Jacqui McShea, Terry Cox, and Danny Thompson) also broke new musical ground and paved the way for many cross-genre explorations. 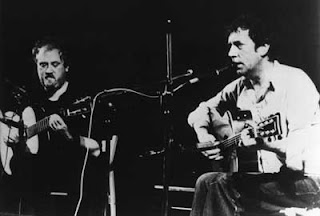 John Renbourn and Bert Jansch, who offered an innovative vision for guitarists.
Neil Young said that Bert was to the acoustic guitar what Jimi was to the electric—Neil was not wrong.

Bert was also an uncompromising vocalist and a powerful songwriter. He never surrendered his caustic Scottish brogue nor his willingness to break the rules to create unique musical experiences.

I had the great fortune to see him three times: once with Pentangle in a large venue, and twice at the wonderful, intimate McCabe's. His playing inspired me to create my own original guitar compositions (you can hear some of them on YouTube in my Instrumental Travelogues playlist).

Ralph Waldo Emerson, in his poem "Each and All," said,
"Nor knowest thou what argument
Thy life to thy neighbor's creed has lent."

It is true that we rarely understand the impact that we have on the lives of others, but my guess is that Reverend Shuttleworth, Mr. Jobs, and Mr. Jansch had an inkling of the positive impact they had on their society. Would that all our leaders, all our innovators, all our artists could catch a little of the spirit of innovation, creativity, and courage that these three men offered to the world.
Posted by Tim McMullen at 10:16 PM 1 comment:

What Kind of Love Song?

This is my latest video (and my latest song). It is another attempt at an annual birthday song for my wife Carolyn. Some others, including "A Pretty Good Start" and "365" can be found on my new playlist at YouTube called Tim McMullen's Love Songs. It includes several of my annual anniversary songs, too.

http://www.youtube.com/watch?v=JojYzRrvmwM
Posted by Tim McMullen at 6:37 AM 2 comments: