Intolerance Does NOT Breed Tolerance: We need to talk 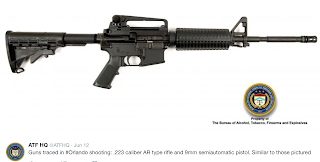 I and a vast majority of people in this country would choose to defend ourselves and our loved ones by making it impossible for individuals to buy or possess weapons designed for military use. Unfortunately, the absurd misreading of the 2nd Amendment by a 5-4 majority of the Scalia court and the irrational shilling for arms manufacturers by the once reputable National Rifle Association (read their history—they only went crazy a few decades ago when greed, marketing, and outrageous right wing ideologies took hold of their national leadership) has caused the dangerous proliferation of weapons in this country.
I am approaching 70 years of age, and I guarantee that this horrific proliferation of gun deaths and mass murder is a very recent phenomenon that is spiraling exponentially. Rational, civic dialogue and reasonable restraints on access to firearms must occur. Play out in your own mind the actual scenario as espoused by the NRA, congressional Republicans, and Donald Trump. Guns in the hands of every teacher, every administrator, and every student in every school from kindergarten to college; guns in the hands of every employee and every employer on every job; guns in the hands of every driver on the road; guns in the hands of every passenger on every bus, train, or plane; ad infinitum. This will make us SAFER?
It is an absolutely absurd and unworkable vision, foolish in the extreme, yet just this kind of argument is trotted out whenever some horrendous tragedy occurs.

I actually encourage complex analysis, nuanced positions, and civil discourse. Put simply, we shouldn't tar whole cultures, religions, races, or nationalities with the brush of a violent few, yet we have to find ways of limiting or eliminating that violence as best we can.

Of course, we will never completely or permanently eliminate violence from any society; still, it seems clear that we have actually done a worse job than many. The proliferation of personal weapons and the increasing deadliness of those arms has certainly not made us safer. Our interventions in the affairs of other countries since WWII have had little to do with "protecting freedom"; in general, they have had much more to do with maintaining or increasing political domination of a region for private profit.

I do find that an alarming number of violent incidents (especially mass murder outside of war), are performed by those who I would characterize as having a fundamentalist point of view—the particular religion is irrelevant. They justify their actions on the grounds of a religious or political view that both encourages and justifies deadly behavior, whether attacking a black church, burning a clinic, killing a doctor, attacking a gay gathering, blowing oneself up in the middle of a crowd, or flying a plane into a building.

Intolerance is at the heart of most of these inhumane acts; a few are simply the work of some tragically unhappy or disgruntled person whose rage at "the other" has overcome his own self-pity, humiliation, loneliness, and emptiness. The problem with intolerance—whether factions, sects, or other “us vs them” groupings—is that intolerance does not breed tolerance. On the other hand, tolerance, in the long run, may actually confront, confound, and convert intolerance. The problem, of course, is that it can take decades, even centuries, to accomplish. Still, although so many of our compatriots do everything that they can to discourage tolerance and encourage intolerance because of their identification with their "team," this country, despite all its historical flaws and contradictions, really has moved slowly toward wider acceptance of others, from Roger William's "Bloody Tenent of Persecution" in the 1600's to our current battle for women's rights, LGBT rights, immigrant rights, et al.

As to the NRA’s advocacy of gun proliferation and Trump’s cheerleading for violence and discrimination, do I think that “good” civilians armed with AR-type rifles or most other weaponry will make us safer? Not on your life or mine. I feel quite certain, both intuitively and intellectually, that more and deadlier guns will make us much less safe; neither do I consider those who purchase these weapons on the pretense of defending or protecting this country to be heroes by any definition.
Posted by Tim McMullen at 10:17 AM No comments:

The Rise of Donald Trump is Remarkable, but Not Surprising. 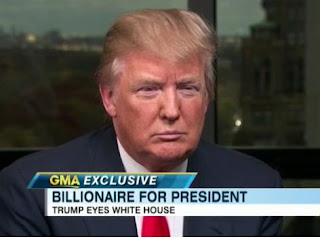 The rise of Trump is truly remarkable, but not surprising. This is what true tribalism looks like, and those who control this society have been marketing this premise for forty years. Ever since Nixon sent Agnew after the "liberal" press (and even before with his "You won't have Nixon to kick around anymore"), the implication was created that the press is just "out to get people.” 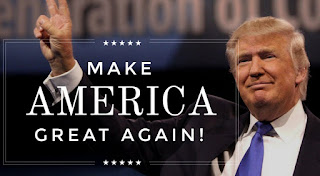 Then, since deregulation under Reagan and his, “Government is the problem” and “it’s your money, NOT the government’s,” the hypocrisy has been unrelenting. The news media truly did become “infotainment” and "the game” became all that mattered.

The greed and selfishness and the mantra of “it doesn’t matter how you win just as long as you win” became the steady media diet in commercials, game shows, sit coms, and celebrity worship. Remember “Lifestyles of the Rich and Famous”? With the help of Jerry Springer turning “lowlife, wretched behavior” into popular entertainment, we moved directly to Paris Hilton, the Kardashians, Duck Dynasty, and Honey Boo Boo. Nearly every show on the Food Network, which used to actually demonstrate cooking, is now competition with only one winner, including several shows where you get to literally sabotage your competition or pay to screw them up. We conspire to “kick people off the island” or “out of the house.”

It has become the same in politics. Term limits eliminate knowledgable public servants and replace them with ideologues and corporate shills. The media provides very little actual background or context for any statement, nor does it actually refute even the most egregious and obvious lies. It merely plays the “he said/he said” game; it’s the outright proliferation of falsehood in the guise of fairness. The "US against THEM” mentality in politics has risen to a fever pitch to the point where people can honestly comfort themselves with the idea: "I don’t care what they say about my guy or what my guy says, our team picked him, so I’m for him. Also, I don’t care how specious the attacks on our opponents; even when I know they are false, I will repeat them incessantly. More importantly, the second I vote, I’m done and can get back to 'reality TV' and complaining about the government.”

This tirade is not just aimed at Republicans although it fits them most completely, but it has come to apply to most of society, who only vote at about a 40% rate or even less in non-presidential years.


Trump is, in part, the result of the philosophy of Ayn Rand pushed by Ronald Reagan, Paul Ryan, Ron Paul, Rand Paul, Justices John Roberts and Clarence Thomas, and the corporate oligarchs. Trump is an absurdly wealthy man with a populist, jingoistic, simplistic message. He is the radical right wing’s answer to FDR, except he has the added appeal of racism, sexism, ignorance, belligerence, and arrogance. He is nearly the perfect package. It's about time that we demand much better from both sides.

If Clinton is the nominee who faces Trump, those who want to make things better need to start today to defeat Trump, who is unquestionably the least qualified, least prepared, most reprehensible individual to stand for the office in any of our lifetimes.

Then, the second that Clinton wins, we need to work for greater transparency and limits on campaign spending; we need new and more effective regulation of the banks and Wall Street, including actually incarcerating wrongdoers instead of letting them merely write off fines or pass the costs to customers; we need to engage in much greater diplomacy and seek a significantly diminished role for the military in international affairs; we need a demilitarization of our local police forces; we need to bolster our social safety net, including Social Security and health care; we need to much more aggressively pursue alternative fuel sources; we need a serious effort to rebuild our infrastructure; we need to enforce and improve our environmental protections; we need to counter the 30 year push to privatize education, the military, government, public spaces, etc.; and we need to bring civil dialogue and negotiation back into our civil society.

NONE of this will be easy, but hopefully Warren, Sanders, Franken, Clinton and many millions of dedicated citizens can begin to accomplish the changes that most of us know we need.
Posted by Tim McMullen at 3:26 PM 1 comment: