The "Eyes" Have It...Celebrating Sixty-Seven Years of Marriage!

Carolyn and Tim had the pleasure of Mel and Jennifer's company all last week (and vice versa). As you know, M & J do everything together, so when their eye doctor told them that they both needed cataract surgery, they scheduled them for the same day. Tim picked them up and brought them to Rowland Heights on Monday, took them to the surgery in Ontario on Tuesday (They were quite a hit in the Kaiser outpatient surgery), and to the post-op check-up on Wednesday. Thursday and Friday they relaxed: Mel worked on the video of their recent trip to China, Tibet and Mongolia on their laptop. Jennifer caught up on e-mails and played games of chance on her iPad. 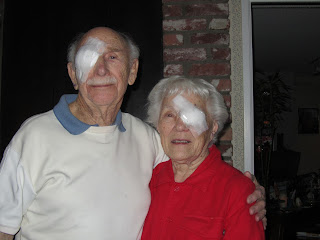 On Saturday, Mel, Jennifer, Carolyn and Tim went to the Mark Taper Forum to see an excellent version of Joe Turner's Come and Gone directed by Phylicia Rashād. 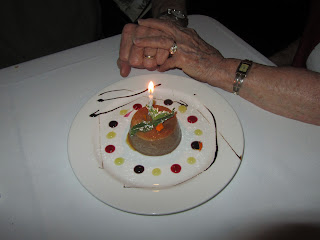 After the play we had dinner at Babita's in San Gabriel (a great, gourmet "Mexicuisine" restaurant) to celebrate the McMullen's 67th wedding anniversary. We had a delicious dinner, and we all enjoyed the complimentary anniversary flan. 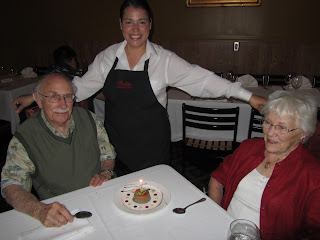 As you can see they both seem completely recovered from the surgery and in high spirits. Today, May 13, is the actual anniversary of their wedding.  Married 67 years and still going strong. They are an inspiration to us all.  Happy Anniversary, Mom and Dad!
Posted by Tim McMullen at 8:59 PM No comments: