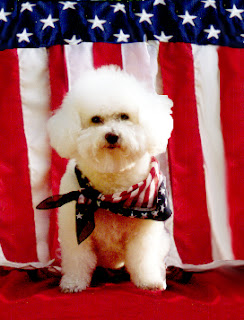 Bijou Belle McSwanson,
The Dog of Democracy.
Happy Independence Day—The day on which the American colonies declared themselves to be United States, a declaration predicated on the outrageous claim "that all men are created equal, that they are endowed by their Creator with certain unalienable Rights, that among these are Life, Liberty and the pursuit of Happiness. That to secure these rights, Governments are instituted among Men, deriving their just powers from the consent of the governed. That whenever any Form of Government becomes destructive of these ends, it is the Right of the People to alter or to abolish it, and to institute new Government, laying its foundation on such principles and organizing its powers in such form, as to them shall seem most likely to effect their Safety and Happiness."
In the age of kings and emperors, this was one of the most idealistic and radical statements in the history of the world. It is critical to recognize that the original "Life, Liberty, and Property" was specifically altered because an idealism based merely on the aristocratic rights (or unjust acquisition) of property could not coexist with the rights of life and liberty. The rights of property had been the linchpin in the oppression of the masses that existed in every monarchy. That schizophrenic battle engendered by the landed gentry on behalf of "the people" in order to justify the gentry's "revolution" from the crown has been waged for over 230 years. Much of the slow progress toward the goal of actually protecting "life, liberty, and the pursuit of happiness" accomplished in the past 100 years is facing its greatest assault since the early 1900's.
The 4th of July is not about "the rockets red glare, the bombs bursting in air." The "Battle Hymn of the Republic" was about the War of 1812. The Declaration of Independence was, in fact a declaration of a new country. The "states" were not at war. Only Massachusetts and New York had been engaged in fighting. This was the majority of people in the thirteen colonies realizing that they must unite or be devoured one by one. It was a recognition that if they were to justify a revolution against the "divine right of kings," they needed a new set of principles. It is those principles that we should be celebrating and for which we should be striving this day and every day.
"The Greatest Threat to Democracy is Hypocrisy! Seek Truth! Speak Truth!"
Tim McMullen
Posted by Tim McMullen at 10:28 AM No comments: