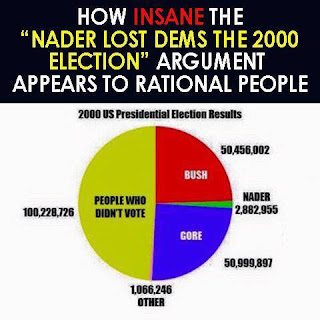 I would argue that this graphic shows exactly the opposite of what they think it does. Yes, America is filled with millions of people who, for whatever reason, choose not to vote. Having voted in EVERY election, from local to national, since I became eligible to vote over 46 years ago, I do not understand their refusal to participate in the only chance that we have to create a working democracy, but I accept it as a given. In large part it is the direct result of the machinations of the oligarchs who have an interest in breeding despair and apathy fomented by a sense of helplessness and hopelessness. It has worked on too many.
On the other hand, let's look at the pie chart. Just how many of those Nader voters do we suppose would have supported the Republican candidate? Nader's people were not middle of the road fence sitters. These were committed liberal and progressives who placed their bet on an an outsider to push their progressive dreams. Again, as with our current alternative candidates, Nader never had the inkling of a chance to become president. Not ANY chance AT ALL. He was supported by only a tiny fraction of the American people, both the voters and the non-voters. So, if even half of those Nader voters had voted for the Democrat, and it is a given that almost NONE of them would have voted for Bush, the Supreme Court could not have intervened with Gore winning by over two million votes. The argument that Nader had no impact on the outcome just doesn't fly.
In the subsequent 16 years, the move to dishearten and disenfranchise voters has increased exponentially, aided by corporate media and that same radically regressive, politically motivated, 5-4 Supreme Court majority that stole the 2000 election with the help of Nader voters. Were we foolish enough to waste a vote on Stein, or Johnson, or Sanders while Republican governors and legislatures all across the country attempt to disenfranchise many millions of likely Democratic voters from students to seniors, we could very well face a debacle so much worse than the Bush presidency that could have an impact for many generations to come. The Supreme Court offers lifetime appointments. Two to four nominations could occur in the next term.
To pretend that a vote for Jill Stein or Bernie Sanders, or much worse, Gary Johnson—each of whom certainly have their own significant drawbacks—is a vote for "conscience" or "purity" is tragically misplaced in this election.
For the record, I have supported Sanders for decades both monetarily and philosophically, having given to his campaigns many times over the years, having given several times prior to this election's primaries, and having given to his new "movement" after he lost.
Voting for someone who has no chance to win, like the Nader vote in 2000, is precisely what those Republican operatives have dreamed of and worked for these past two presidential elections. Thousands of them trolled the Sanders campaign, enflaming the NEVER HILLARY lies that they have been perpetrating and perpetuating for thirty years.They have fomented the anti-"Democratic Establishment" vote that would hand total control of the country to the corporatocracy.
Hillary Clinton, like most people, has swallowed the "magic free market" fallacy for the last thirty years (including not merely all the current Republican politicians and most corrupt corporate management, but most Democratic politicians including Bill and Hillary Clinton and Barack Obama). However, like Obama, she also has progressive tendencies that need to be constantly prodded and pushed toward more progressive goals both socially and economically. A Trump win will NOT accomplish any of this. In fact, it is much more likely to entrench the power mongers and consolidate their stranglehold for many decades.
This is not an attempt at fear-mongering. It is an attempt to analyze clearly that chart and the argument proposed above. It is an attempt to reveal the likely outcome of the ironically claimed "vote of conscience" which elects Trump and renews the Republican legislative majority.
Posted by Tim McMullen at 10:21 AM 2 comments: